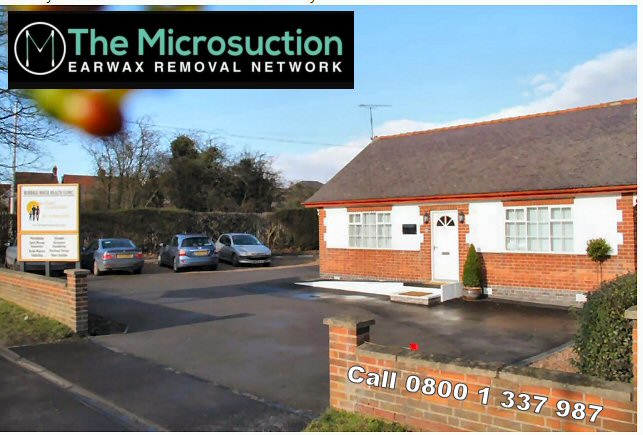 The microsuction wax removal clinic in Hinckley is open for Microsuction Earwax removal in the Midlands.  So if you are suffering from a build-up of earwax then we are here to help you.

Unfortunately, the size and shape of your ear canal, as well as the amount and type of earwax, are genetically determined. To reduce earwax build-up, it is recommended that you apply a squirt of earol (a sterile, sealed olive oil spray) in your ears twice a week. If you have a blocked ear, we recommend that you apply a couple of short squirts daily of earol for a few days and then visit one of our expert earwax removal clinics for microsuction.

You can book an appointment at our micro-suction ear wax removal clinic in Hinckley.

Please do not hesitate to contact us for further information.

Please do not put cotton wool after applying the ear wax, as this will only absorb the olive oil and prevent it from working.

Remember: never use cotton buds. If none of the things suggested in our guide work for you, make an appointment with your doctor. Wax build-up in the ears can cause medical problems, from infections to hearing loss.

In the Midlands, we have our private micro wax suction clinic in Hinckley and Solihull.

It is normal for the ear to produce earwax. In most cases, cleaning earwax does more harm than good. If it is necessary to clean your ear from time to time, you should see a doctor make sure it is done safely so that your ear is not damaged or you suffer hearing loss. Have you discovered our previous blog post on earwax? If not, check out our blogpost on “Does earwax damage hearing aids?”

Even when standard medical treatments do not relieve tinnitus, most people learn to tolerate the problem by ignoring the noise or using various strategies to mask the sound. For others, however, the persistent ringing affects their wellbeing and contributes to a depressed mood or anxiety.

If your ear is clogged with wax and it is painful, you can use Earol to loosen the wax, but then you should see a qualified audiologist to have it professionally cleaned.

Finding the best earwax removal specialist can be a little confusing, especially if you haven’t done much research on the subject before.

Lifestyle and home remedies are not recommended. If you try to remove hard earwax at home, you are likely to make your hearing problems worse. Pharmaceutical grade mineral oil, glycerine or olive oil can be used to soften the wax for a few days, but it is advisable to make an appointment at your local ear wax removal clinic afterwards. Unfortunately, any home remedy method can push the wax further into the ear canal, making the problem worse! Our professional staff uses microsuction, the gold standard in earwax removal. This method uses sterile suction tips and does not introduce water into the ear, making it much safer and almost 100% effective. 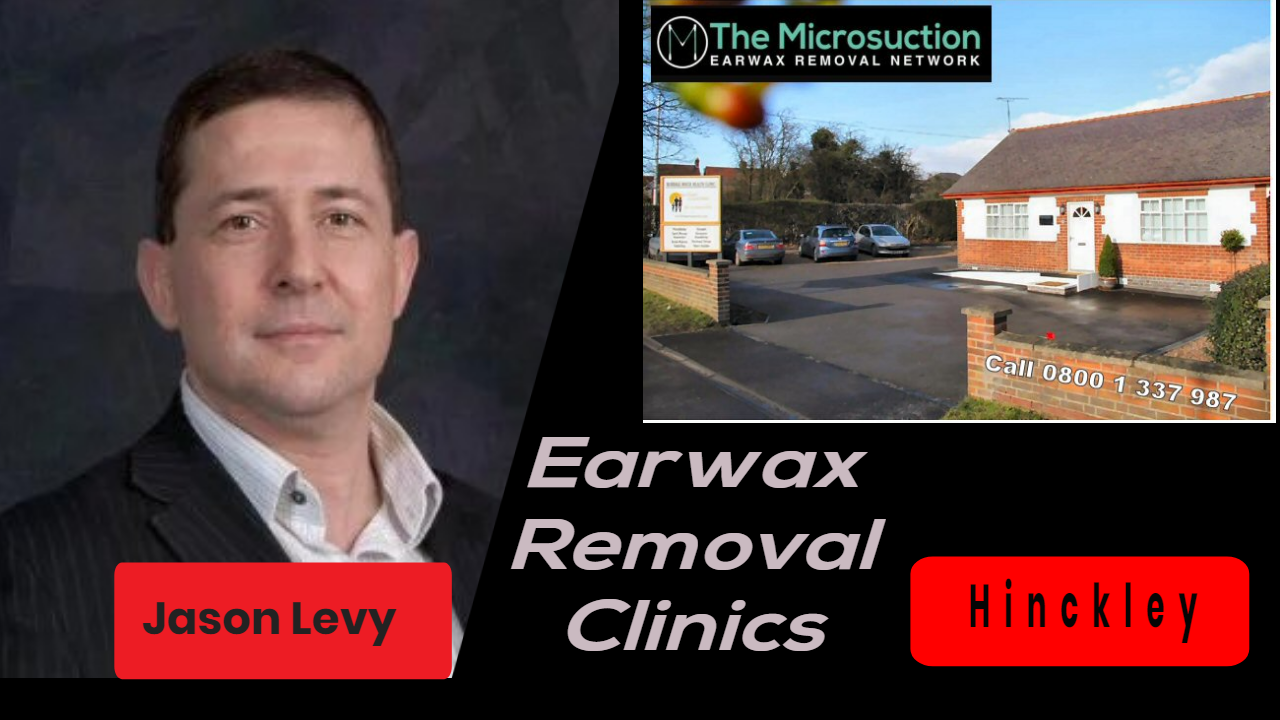 When choosing an ear wax removal clinic, you should first consider the severity of the ear wax build-up.

If the build-up is so severe that earwax is invading the ear, to the point of causing discomfort and hearing problems, you should make an appointment with an audiologist in your area who specialises in earwax removal in a safe and clinically sterile environment to reduce the risk of further infection.

Private ear wax removal with micro-suction is by appointment only. You can book by calling 0800 1 337 987

How often should I have my earwax removed?

This depends largely on your personal health and other factors, such as genetic conditions of the ear. There is no hard and fast rule, except that if you have a hearing problem, you should see a wax removal expert rather than trying to fix the problem yourself.

Wax can be removed if you have a hearing problem.

You cannot regulate earwax production or change the width and shape of the ear canal. However, preventive self-care measures can help reduce the occurrence of earwax: if you are prone to earwax build-up, you should see your ear specialist have your ear cleaned regularly to prevent future blockages. Your ear is more than capable of cleaning itself. Unnecessary poking and prodding with sharp, invasive ear cleaning tools will only irritate your delicate inner lining and push earwax further into the cavity.

Wax blockage is often caused by the overproduction of earwax or inadequate cleaning. Surprisingly, the most common cause of earwax blockage is improper earwax removal at home. Instead of removing earwax, it is often just pushed deeper into the ear. The use of earphones and earplugs can also cause earwax to build up, as earphones can prevent earwax from naturally leaving the ear canal.

Ear wax plays an important role in protecting and maintaining the function of the ear canal. It is a waxy substance that can be either thin or thick, depending on its location and deposit. Inside the ear canal, it is secreted to protect the delicate, thin skin lining the canals and prevent bacteria and dirt from entering and causing infections. Even if you try to remove it from the pinna regularly, it can build up in the ear canal and get stuck. This often happens with cotton buds, which can push the wax even further. Earwax can also build up in the ear canals if you use hearing aids or earbuds.

Here’s an example of one of the many reviews we received. A quick and painless experience: “I normally have my ears injected because of a waxing problem, but today I tried microsuction at Hinckley for the first time and it was quick and painless, both ears were done in less than 15 minutes. Highly recommended.”

The ear canal produces ear wax from the lining of the canal. Ears produce wax to lubricate and protect the ear canal. The ear canal is the tube that connects the middle ear to the outside of the ear. Wax protects the ear from bacteria, infection and damage caused by water or trauma. Wax that forms in the canal naturally moves out of the ear and falls out. In some cases, the ear may produce too much earwax. If the wax is causing problems or preventing the doctor from seeing inside the ear, the excess wax can be removed.

The ear canal is lined with oil glands and earwax glands that produce an oily, slimy substance called cerumen, better known as earwax. This oily secretion forms a protective covering over the delicate skin of the inner ear to protect it from external threats. The sticky wax that lines the ear cavity traps invading germs, dust and other irritants and keeps the ear canal well lubricated. Earwax is vital to ear health, but it can be a problem if it is secreted in excessive amounts or builds up over time.

What causes earwax build-up is a question many people ask. Earwax is naturally produced by the body as a defence mechanism for the ears, helping to keep them clean and making it harder for germs to live in them. For most people, this process goes unnoticed, as the earwax does not cause any problems and falls out of the ears on its own. However, some people experience an increased accumulation of earwax and there are several reasons why this happens

Wax is deposited in the ear for a number of reasons. Probably the most common cause is the habit of using cotton buds to try to clean the ears. This is a common routine for many people, but it has the opposite and unintended effect of pushing earwax deeper into the ear canal, where it accumulates and lodges. Wax build-up is also more common when wearing hearing aids or earplugs, as these can also prevent wax from leaving the ear canal. Sometimes, the consistency of the earwax itself or the texture of the skin in the ear canal can also encourage wax build-up.

The good news is that an audiologist can remove excess earwax. There are two main methods that audiologists use to remove earwax. One method is manual removal. This is done using either a scraping instrument called a curette or a suction device called microsuction. During the procedure, the audiologist inserts one of these instruments into the patient’s ear and attempts to manually remove the mass of earwax.